Portland is the largest city in the U.S. state of Maine, with a population of 66,881 as of 2015.[5] The Greater Portland metropolitan area is home to over half a million people, more than one-third of Maine's total population. The Old Port district is frequented by tourists, while Portland Head Light is also a destination. The city seal depicts a phoenix rising from ashes, which is a reference to the recoveries from four devastating fires.[6] Portland was named for the English Isle of Portland, and the city of Portland, Oregon was in turn named after Portland, Maine.

Portland is organized into neighborhoods generally recognized by residents,[citation needed] but they have no legal or political authority. In many cases, city signs identify neighborhoods or intersections (which are often called corners). Most city neighborhoods have a local association,[20] which usually maintains ongoing relations of varying degrees with the city government on issues affecting the neighborhood.

On March 8, 1899, Portland annexed the neighboring city of Deering.[21] Deering neighborhoods now comprise the northern and eastern sections of the city before the merger. Portland's Deering High School was formerly the public high school for Deering.

Native Americans originally called the Portland peninsula Machigonne ("Great Neck").[7] Portland, Maine, was named for the English Isle of Portland, and the city of Portland, Oregon, was in turn named for Portland, Maine.[8] The first European settler was Capt. Christopher Levett, an English naval captain granted 6,000 acres (2,400 ha) in 1623 to found a settlement in Casco Bay. A member of the Council for New England and agent for Ferdinando Gorges, Levett built a stone house where he left a company of ten men, then returned to England and wrote a book about his voyage to drum up support for the settlement.[9] The settlement failed, and the fate of Levett's colonists is unknown. The explorer sailed from England to the Massachusetts Bay Colony to meet John Winthrop in 1630, but never returned to Maine. Fort Levett in the harbor is named for him.

The peninsula was first permanently settled in 1632 as a fishing and trading village named Casco.[7]When the Massachusetts Bay Colony took over Casco Bay in 1658, the town's name changed again to Falmouth. In 1676, the village was destroyed by the Abenaki during King Philip's War. It was rebuilt. During King William's War, a raiding party of French and Native allies attacked and largely destroyed it again in the Battle of Fort Loyal (1690). 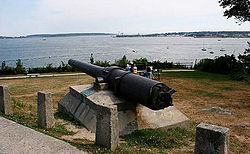 On October 18, 1775, Falmouth was burned in the Revolution by the Royal Navy under command of Captain Henry Mowat.[10]

Following the war, a section of Falmouth called The Neck developed as a commercial port and began to grow rapidly as a shipping center. In 1786, the citizens of Falmouth formed a separate town in Falmouth Neck and named it Portland, after the isle off the coast of Dorset, England.[1]Portland's economy was greatly stressed by the Embargo Act of 1807 (prohibition of trade with the British), which ended in 1809, and the War of 1812, which ended in 1815.

In 1820, Maine became a state with Portland as its capital. In 1832, the capital was moved north to Augusta. In 1851, Maine led the nation by passing the first state law prohibiting the sale of alcohol except for "medicinal, mechanical or manufacturing purposes." The law subsequently became known as the Maine law, as 18 states quickly followed. On June 2, 1855, the Portland Rum Riot occurred.

On June 26, 1863, a Confederate raiding party led by Captain Charles Read entered the harbor at Portland and the Battle of Portland Harbor ensued, one of the northernmost battles of the Civil War. The 1866 Great Fire of Portland, Maine, on July 4, 1866, ignited during the Independence Day celebration, destroyed most of the commercial buildings in the city, half the churches and hundreds of homes. More than 10,000 people were left homeless.

By act of the Maine Legislature in 1899, Portland annexed the city of Deering,[11] despite a vote by Deering residents rejecting the annexation, thereby greatly increasing the size of the city and opening areas for development beyond the peninsula.[12]

The construction of The Maine Mall, an indoor shopping center established in the suburb of South Portland, during the 1970s, economically depressed downtown Portland. The trend reversed when tourists and new businesses started revitalizing the old seaport, a part of which is known locally as the Old Port. Since the 1990s, the historically industrial Bayside neighborhood has seen rapid development, including attracting a Whole Foods and Trader Joes supermarkets. Other rapidly developing neighborhoods include the India Street neighborhood near the Ocean Gateway and Munjoy Hill, where many modern condos have been built. [13][14][15] The Maine College of Art has been a revitalizing force downtown, attracting students from around the country. The historic Porteous building on Congress Street was restored by the College.

Listing data is derived in whole or in part from the Maine IDX and is for consumers' personal, non-commercial use only. Dimensions are approximate and not guaranteed. All data should be independently verified. © 2019 Maine Real Estate Information System, Inc. All Rights Reserved. Privacy Policy: The publisher and owner of this website will never distribute or sell your contact information or email address.

Thank you for contacting us, we'll get back to you shortly.

Sorry, we are unable to send your message at the moment. Please try again later.